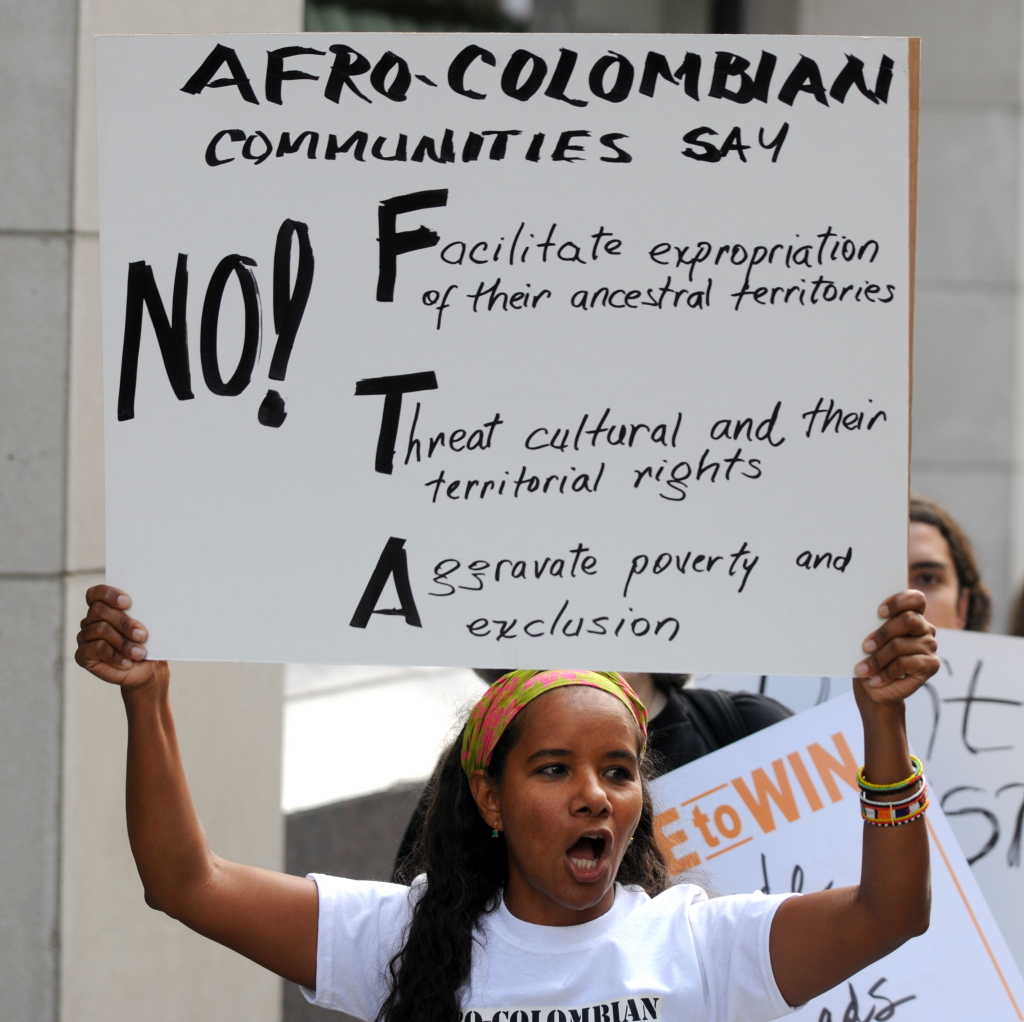 Editor’s note: on the evening of Saturday, May 4, armed men shot at a delegation of Afro-Colombian leaders in the country’s northern Cauca region. Among those in the delegation was Francia Marquez Mina, an Afro-Colombian environmental and human rights activist who has gained international renown. While Marquez and the delegation’s other leaders survived the attack, two of their bodyguards did not. News of their deaths brought to world’s attention the harrowing situation facing the country’s labor and social movement activists, with over 600 having been assassinated and hundreds more imprisoned since 2016.

Beyond the routine intimidation, police harassment, and targeted attacks, these movements have also had to contend with the legacy of an official refusal to identify Afro-Colombians, Latin America’s second-largest Black population, as a distinct group. As the following report suggests, these movements have long demanded not simply the enforcement of basic human rights and redress for past injustices, but also the sort of social and political recognition that would necessitate the government’s collection of information about the various forms of discrimination facing Afro-Colombian people as the first step towards correcting these injustices.

Earlier this year, the Observatory of Racial Discrimination at the University of the Andes and the Center for the Socioeconomic Reasearch and Documentation at the University of Valle prepared  "Race and Human Rights in Colombia," a report on the racial discrimination faced by the Afro-Colombian population. The report’s data and analysis serve as clear evidence that Afro-Colombians enjoy fewer rights than the majority mestizo population, a fact that constitutes discrimination under the United Nations’ International Convention on the Elimination of All Forms of Racial Discrimination (ICERD) as well as the International Labor Organization convention 111.

This report made it clear that Colombia lacks the public policies needed to reduce the historical gap between the enjoyment of rights of the Afro-descendant population and the rest of the country. It also showed that this is directly related to the failure by authorities to collect the sort of information the lack of information that might call attention to the discrimination, precarization and marginalization faced by this population. Operating under the claim “that there is no institutional or legal discrimination in Colombia and that the effect of the mestizaje [or racial and cultural mixture – ed.] processes on the population have generated equivalent conditions for all persons and communities,” the Colombian state spent much of the 20th century refusing to collect data on the discrimination faced by the country’s ethnic-racial groups, despite concerted pressure from civil society and international human rights organizations.

It was not until the 2005 census that some progress had been made towards including a question of collecting responses on ethnic-cultural identity. While this provided important population data, there remains no reliable statistics on specific problems of work, education, health, food, housing and forced displacement, among others, all issues of crucial importance for public policies designed to realize the human rights for this population.

A Legacy of Marginalization

One consequence of this legacy is that the state still does not know the real percentage of this Afro-descendent population. This is largely due to failures of the 2005 census, which despite making advances through its inclusion of an ethnic-racial identity question, still faced problems associated with the process of both defining this identity and effectively educating individuals on how to answer it.

This legacy of official marginalization permeates Colombian society. Educational institutions, for instance, do not regularly keep track of their Afro-Colombian population. The same situation is faced by health service providers, who then argue that they don’t design differential policies for people of African descent, under the excuse that they do not know the ethnic-racial composition of those who are users or benefit from their services. This is emblematic of the way this legacy of marginalization has undermined the design of progressive policies that might help overcome the systemic and institutional barriers that routinely prevent Afro-Colombians from securing their human rights.

In spite of this legacy, all records indicate that Afro-Colombians are approximately 25 percent of the country’s population and, as workers, find themselves relegated to sectors of the economy that have been prime targets for labor outsourcing and informality.

More than 60 percent of Afro-descendants are poor and almost a quarter live in misery, rates considerably higher than those of the mestizo population. As a consequence, Afro-descendant men and women live, on average, six years and eleven years less than the national average, respectively.

In addition, 15 percent of the Afro-descendant population regularly goes hungry, and 12.3 percent of Afro-Colombians are affected by forced displacement. This population is largely concentrated in regions of the country that are most affected by the armed conflict, particularly the Pacific Coast and southwest, which further exacerbates poverty and undermines the full enjoyment of human rights.

Discrimination in the labor market (market discrimination) pushes ethno-racial groups to the bottom of the occupational structure and depresses their wages in such a way that they are overrepresented among the poorest in society. In turn, past discrimination against one generation affects the ability of the next generation to build skills useful for success in the labor market (pre-market discrimination). All of the above creates a feedback process in which Afro-Colombian and indigenous households have little chance of escaping poverty, developing their skills and achieving social advancement.

As a result of this feedback process, non-mestizo ethnic and racial groups have greater socio-demographic vulnerability, worse living conditions and fewer opportunities to participate in the markets for goods and services, all of which has traditionally been associated with poverty and as a consequence of the process of social stratification.

However, in Colombia, there has been little investigation of the factors that induce those results for these populations. For this recent report, it was important to define the institutional factors associated with ethno-racial discrimination, especially in the labor market, which could affect the attainment of socioeconomic status for these marginalized groups.

Pre-market discrimination calls attention to the inequality of opportunities to develop talents and skills before employment such as low levels of health, inferior schools and colleges, poor health services, race gaps and gender in university education, among others. Overall, pre-market discrimination plays a significant factor in, for instance, lowering the labor force participation of the black and indigenous population in comparison to other ethnic-racial groups.

The percentage of those unemployed is 53.3 percent higher for the black population than for the mestizo population, with stark gender differences: 57.2 percent for women and 38.2 percent for men.

These statistics reflect the fact that this population has relatively few assets to overcome situations of vulnerability and poverty, not only due to their educational attainment and lack of job training but also a lower labor demand associated with the prejudices and stereotypes held by employers.

Market discrimination denotes the differential treatment in the labor market for people who are equally productive on the basis of their observable characteristics such as race, ethnicity and gender. Sixty percent of the black population have low-quality jobs compared to 45 percent of mixed-race whites. The black population earns an average of 59 percent less than white, mestizo men.

In Colombia, there are currently three key circumstances under which Afro-descendant workers are victims of market discrimination. In the first place, labor sectors with high levels of labor informality, such as port workers, cane cutters and oil palm growers, mining sector, domestic workers, construction, are also those in which the majority population is Afro-descendants.

Secondly, Afrodescendants face obstacles that prevent them from gaining access to other economic sectors, with the most evident cases being the financial services, commerce, tourism, air transport and military forces.

And finally, even cases where these obstacles do not exist, racial discrimination is still used to consign Afro-descendants to subordinate positions, regardless of whether or not they have the appropriate profile for promotion. Thus, even the black population with equal levels of education to whites and mestizos, systematically face higher unemployment rates, more precarious jobs and lower incomes.

The further one ascends up the occupational pyramid, the more evident it is that mestizos are overrepresented in relation to Afro-Colombians, such that, in the occupations where managers and professionals are found, mestizos are represented (4.4% percent) twice as often as Afro-descendants (2.2 percent).

On top of this, there remains a gap in income, despite the fact that a person of African descent who occupies a position of high status that requires professional and specialized studies, can receive a lower salary than a mestizo person. Statistics of the Great Integrated Household Survey (GEIH) for 2007, shows that a worker of African descent has a lower salary than a mestizo; the first receives 71 percent of the second. Overall, the Afro population is concentrated in jobs of lower status and therefore lower wages, correlated with large differences in social status, with more than half of black workers located at this precarious level (53.5%), compared with just 40 percent of mestizo workers.

While Afro-descendent workers find themselves marginalized in the economy, they are also called upon to support through their wages a portion of the population that is higher than the national average. At the national level, the Afro-descendant population has a dependency rate of 63, that is, approximately 63 people depend on every 100 of productive age. For the mestizo population, the dependency rate is 57 and for the national total of all the ethnic groups, it is 59 people in vulnerable ages per 100 in productive ages. This high rate of economic dependence translates into fewer opportunities for both securing control over economic resources and accessing goods and services, all of which exacerbates the conditions of poverty and demonstrates the greater need for social welfare on the part of this population and for affirmative state action against racial discrimination.

Caption: These Afro-Colombian sugar cane workers are emblematic of the low-wage jobs open to most people of African descent in the racially stratified country.

Life and Legacy of Nipsey Hussle: The Marathon Continues