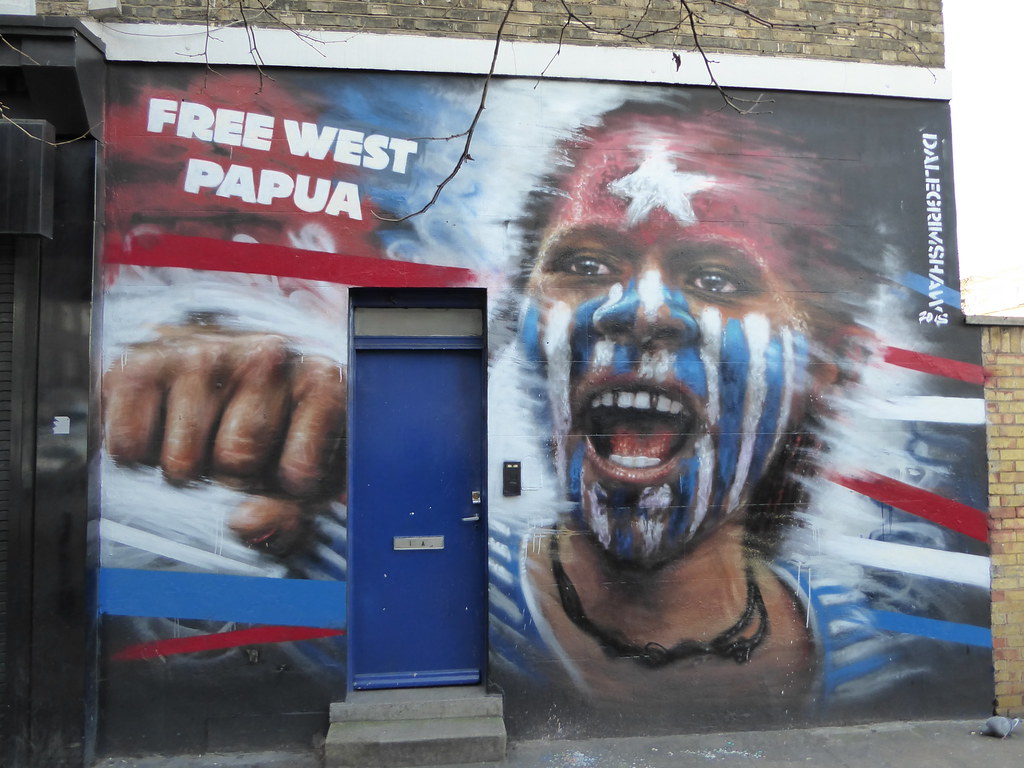 The Indonesian province of West Papua is, in reality, a colony, an occupied land whose indigenous people are regarded as monkeys because they are Black. This hidden colony, its land and people exploited, has been the victim of racial oppression and a slow-motion genocide that has claimed half a million lives over the course of five decades. The Melanesian people of West Papua continue to die, and their struggle for independence continues.

In recent months, thousands of Indonesian troops have descended upon West Papua, with the government imposing a media blackout, a restriction on foreign journalists, NGOs and humanitarian agencies and shutdown of the Internet. Thousands protested throughout the region in August following the mass arrest of 43 Papuan university students who allegedly burned an Indonesian flag on Indonesian independence day. The students faced a lynch mob, and teargas from soldiers who hurled racial epithets such as “monkeys,” “dogs” and “pigs” at them. Most recently, police gunned down of dozens of protestors, possibly more, in the West Papuan town of Wamena. Protests had erupted as a result of racist comments made by a high school teacher. More than 11,500 people have fled Wamena in light of the violence.

West Papuans are told they are part of Indonesia, yet as Melanesians, they have no racial, cultural or linguistic ties to the Southeast Asian nation. What West Papua does have are vast natural resources, which is why its people are the victims of imperialism and neocolonialism, displaced, dispossessed and overrun in their own land.

Two nations share the island of Papua, which is located directly north of Australia, and whose people migrated from the African continent about 50,000 years ago. Papua New Guinea, a nation that gained independence from Australia in 1975, occupies the eastern half of the island. Formerly known as Dutch New Guinea, West Papua declared its independence from the Netherlands in 1961. Melanesia includes Papua, Fiji, Vanuatu, the Solomon Islands, the French territory of New Caledonia and the Torres Straits in Australia.

The 1962 New York Agreement transferred Dutch control of West Papua to the United Nations and effectively gifted the region to Indonesia. Over the next several years, Indonesia killed 30,000 Papuans in the process of occupying and seizing the land through a brutal military dictatorship that received U.S. military aid, including financing, training and equipment. With support from the Pentagon, Indonesia also exterminated one million suspected Indonesian communists and leftist dissidents during the Cold War, and occupied East Timor, killing 100,000 to 200,000 people. Meanwhile, Indonesia opened up its country to Western investment, its land and resources to American exploitation.

In 1969, Indonesia annexed West Papua through a sham referendum in which the military forced 1,026 West Papuan men at gunpoint to vote for a union with Indonesia, despite overwhelming calls for self-determination from the Papuan people. President Richard Nixon, and before him, Lyndon Johnson, supported the Indonesian subjugation of West Papua.

With the third-largest rainforest in the world – after the Amazon and the Congo – the island of Papua contains 5% of the world’s animal and plant species. Papua is rich in natural resources and minerals such as gold, silver and copper, and is threatened with deforestation, wildlife exploitation, logging and oil palm plantations. The Papuan people are among the poorest in Indonesia.

The Indonesian government is reportedly allowing armed and radical Islamic militias to attack West Papuan civilians. Facebook and Instagram have shut down numerous Indonesian accounts that were found to mislead users with coordinated inauthentic behavior regarding West Papua. As much as $300,000 in Facebook propaganda ads were purchased in rupiah, the Indonesian currency.

The current anti-racism protests in West Papua, the most significant in 20 years, reflect years of pro-independence activism and struggle against discrimination. However, this time around there are outbreaks of resistance, reflecting a groundswell coming from ordinary people, and without a central leadership.

Further, Indonesians have been among those arrested for leading and participating in some of the pro-Papuan protests, and one Indonesian has been charged with treason, according to Indonesian human rights lawyer Veronica Koman. The Indonesian regime has targeted and threatened Koman and her family because she is challenging human rights abuses against West Papuans, and shedding light on atrocities such as the 2014 Paniai shootings.

Fourteen students were shot to death by security forces in Papua province – and at least 17 others were injured by military gunfire and bayonets – for protesting the beating of a child by Indonesian soldiers. Soldiers fired into the crowd of peaceful demonstrators at Karel Gobai field in Enarotali, Paniai District, just one of many gross human rights violations.

Over the years, West Papuan pro-independence activists and artists have faced imprisonment, murder and forced exile. Arnold Ap, a West Papuan musician, anthropologist and cultural leader, was detained by the Indonesian military for sympathizing with the Free Papua Movement and celebrating indigenous Papuan culture. Ap and his musician colleague Eddie Mofu, both of the folk group Mambesak – who opposed environmental destructive deforestation and mining policies – were executed in 1984.

The Black Brothers – a West Papuan pop, reggae and funk group from the 1970s and 1980s influenced by the Black Power Movement – went into voluntary exile in Vanuatu and later in Papua New Guinea in protest of Indonesian policies.

Currently in exile in the UK, Wenda once lived in hiding in the jungle with his family and thousands others from the remote West Papuan highlands to escape the Indonesian military. He was smuggled out of the country to avoid imprisonment. Wenda submitted a petition signed by 1.8 million West Papuans calling for self-determination to the U.N.

“I don’t want to repeat that history like what happened to Aboriginal Australia or the American Indian. That’s why this is an international issue. This is not an Indonesian internal issue anymore,” he added, calling for international involvement to facilitate an end to Indonesian occupation.

That independence protests are spreading across West Papua and the Indonesian military is responding with violence underscores the urgency of the situation. As West Papuans demand a referendum and their right to self-determination, colonizers must get out.

The Threats to Migrants in the Libyan Conflict