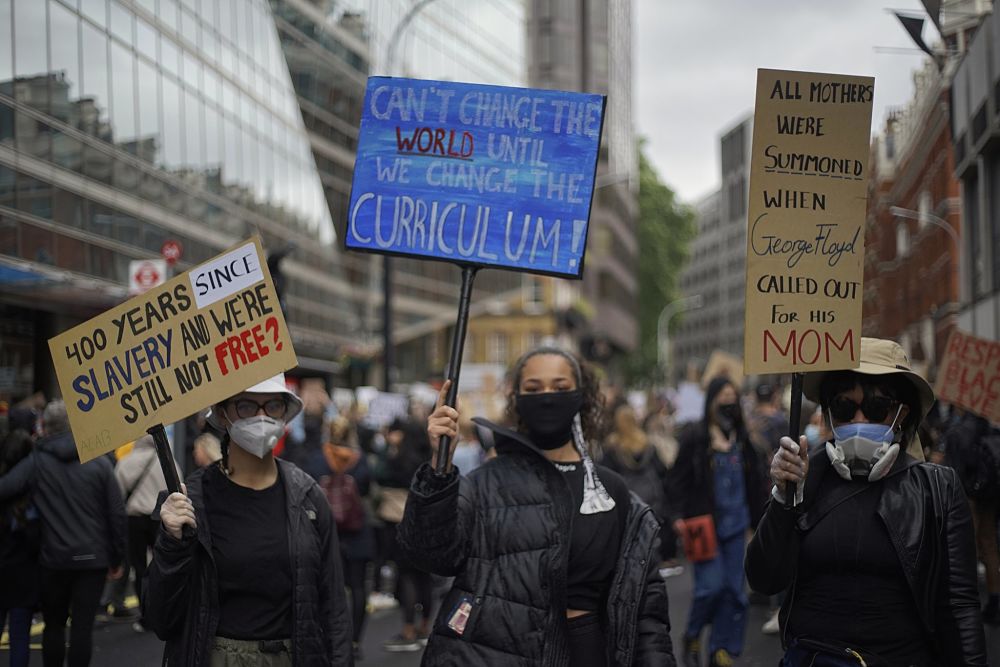 No one ever knows what event will emerge as the catalyst that will trigger a revolution. In 2020, amid the COVID-19 pandemic – which had already laid bare America’s fundamental racial and economic inequities and the bankruptcy of its system of governance – a Black man named George Floyd was murdered by the Minneapolis police. Floyd, who himself had recovered from the coronavirus, was killed by a pandemic of racial violence and state-sanctioned oppression. The response to his murder was unprecedented, with millions of people participating in protests across the country in what is shaping up to be the largest social justice movement in U.S. history.

Whether a rebellion or a mini-revolution, Black Lives Matter 2.0 – this year’s iteration of the movement as opposed to the events of 2014 in Ferguson and other cities following the murder of Michael Brown – is not only a domestic phenomenon, but a worldwide movement for justice. Protests and demonstrations taking place throughout the world – from South Africa to South Korea – reflect not only solidarity with people of African descent living in the belly of the beast in the United States, but also the plight of Black people wherever they live throughout the diaspora.

Racial oppression and economic exploitation are universal phenomena, and the legacy of white supremacy and colonialism persist across the globe. The death of George Floyd was a catalyst to begin a discussion on the dismantling of symbols and structures of white supremacy.

“I’m speaking to you from my heart. Look, I don’t know if I’m going to have a career after this, but f*** that,” he added, noting that every Black person can remember the time when someone reminded them they were Black. “Today is about innocent people who were halfway through their process, we don’t know what George Floyd could have achieved, we don’t know what Sandra Bland could have achieved, but today we’re going to make sure that won’t be an alien thought to our young ones.”

In Bristol, England, Black Lives Matter protesters toppled a statue of the 17th century slave trader Edward Colston and threw it into the river, replacing it with a sculpture of Black activist Jen Reid, complete with afro and raised fist.

In the wake of the protests, some U.K. corporations have been eyed for their ties to the transatlantic slave trade. The insurance firm Lloyd’s of London and Greene King, the nation’s leading brewer and pub owner, acknowledged their role in the slave trade and promised to make amend, with the former apologizing for its “shameful” role in profiting from slavery. In an open letter, rapper T.I. demanded that the insurance giant pay reparations to the descendants of the enslaved in America.

The protests are being felt in other ways. For example, the Archbishop of Canterbury, who leads the Church of England, said the portrayal of Jesus as a white man must be "thought about again" and "re-imagined."

Jesus was a Black Palestinian Jew, and Palestinian Lives Matter. The solidarity between Palestinian and Black Lives Matter activists was on display in 2014 when Palestinians instructed Ferguson protesters on how to protect themselves from teargas. The CTS brand of teargas, produced in Jamestown, Pennsylvania, is used by the Israeli military in the Occupied Territories and by the militarized police in Ferguson. That police force, the St. Louis County Police Department, received training in Israel under a program sponsored by the Anti-Defamation League (ADL), with participation from the FBI, ICE and other U.S. law enforcement agencies, the Israel Defense Forces, Israeli National Police and Israeli intelligence.

Meanwhile, a mural of George Floyd was painted on the Israeli Separation Wall, a barrier in Bethlehem on the West Bank, where Floyd’s death drew parallels with Iyad al-Halaq, 32, an autistic Palestinian man who was chased by police and shot to death. There are murals depicting Halaq and Floyd together in the West Bank, a place where folks are well-acquainted with police violence and brutality, and where nonviolent protesters have longed experienced the maiming and blindness that comes from police sniper fire – a reality to which American protesters were only recently acquainted.

Black Lives Matter protesters in Israel have said the name of Solomon Teka, 18, an Ethiopian Israeli who was killed by an off-duty police officer who said his life was threatened. The police violence visited upon Ethiopian Israelis reflects the systemic racial discrimination which Black Jews and other Jews of color face in that Mideast country.

In Belgium, where a giant George Floyd mural by Belgian-Congolese street artist NovaDead now stands in Brussels, hundreds participated in antiracism protests. Statues of King Leopold II, responsible for the genocide of millions in the Congo, were defaced, burned and removed, forcing a reckoning in that European nation over its colonial past. And in Berlin, Germany, also a site of George Floyd protests, Afro-German activists were victorious in forcing the renaming of the Mohrenstraße (Moor Street) subway station. The name, considered a racially derogatory term reflecting Germany’s colonial past, was changed after years of Black opposition.

Showing their solidarity with Floyd, thousands of people marched across New Zealand, with protesters performing the haka, the Maori war dance, in front of the U.S. Embassy. And Black Australian NBA star Patty Mills, a guard for the San Antonio Spurs, donated over US$1 million (A$1.4 million) of his salary to Australian racial justice groups, including Black Lives Matter Australia, Black Deaths in Custody and a sports antiracism campaign called “We Got You.”

The murder of George Floyd has fueled activism in West Papua, the Melanesian colony annexed by Indonesia in 1963 that shares an island with Papua New Guinea and has struggled for independence for decades. Years of genocide, racial discrimination and police violence against Black Papuans has produced many George Floyds, as Papuans draw comparisons between Floyd and Obby Kogoya, a Black university student who was pinned down and whose head was stepped on by police before he was arrested. Following recent events in Minneapolis, Indonesians are being made to come to terms with racism and colorism in their country.

Black Lives Matter is a global movement. No one knows where all of this is going. Toppling the global symbols of white supremacy is something to behold.

Caption: BLM Londoners march in to the U.S. embassy, summer 2020.