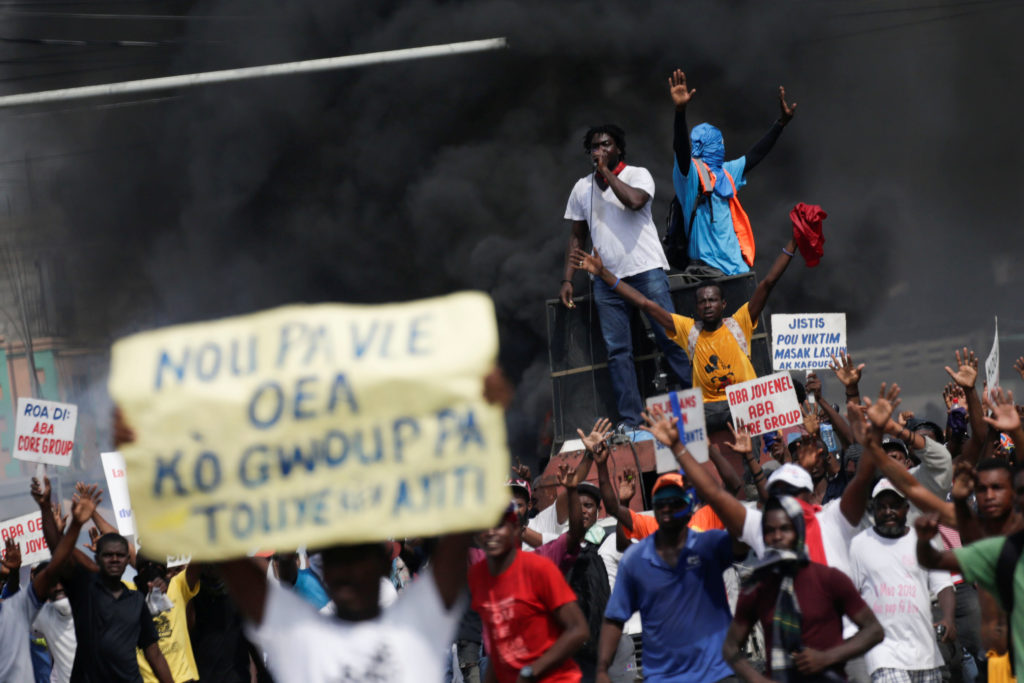 During the last two months, Haiti has been embroiled in an intense period of political upheaval, pitting an increasing number of civil society’s sectors and political parties against President Jovenel Moise, the oligarchy and other ruling forces of this U.S.-dominated satellite state.

Indicative of a deep societal crisis, this looming situation of sustained popular challenges represents yet another potentially decisive episode in the country’s history. It also opens up the political space for growing militancy, determined popular uprisings, widespread questioning of the “system,” and a hunger for transformative perspectives.

In particular, the masses in Haiti have come to fully reject the oligarchy and their political lackeys. Haiti’s ruling sectors are finding it harder to assert their long-established domination.

As various social groups coalesce and position themselves against the president and plead for reforms to the structurally and institutionally unjust society, the U.S.-sponsored power structure in Haiti is attacked on all fronts. The Catholic church, various protestant denominations, teachers, students, health care professionals, labor unions, and artists have each taken turns in organizing huge demonstrations to ask Jovenel Moise to step down – and to demand meaningful societal changes.

Yet the process of charting a path toward meaningful social change remains quite elusive in Haiti. To unveil the intricacies of the situation in Haiti and underscore the challenges facing the masses in their legitimate struggle, one ought to revisit the beginning of this current popular resistance to the predatory, exploitative and oppressive system.

It all started on July 6, 2018. As Haitians were enjoying the rare treat of uninterrupted electrical power, the country was glued to their TV screens watching their beloved Brazilian national football team. The government used this moment to strategically announce increases of up to 51% in the price of fuel.

The malicious strategy of using entertainment to mask in effect a massive increase in the cost of living backfired. Immediately, the unwelcomed measures triggered popular anger and resentment. Protests erupted in most major cities and villages. The massive nationwide civil disorder gave way to waves of seemingly disjointed groups of protestors taking to the streets, setting up barricades, burning tires and looting targeted stores belonging to leading oligarchs close to the president.

The government responded with a tasteless propaganda campaign – touting the “potential benefits” that the people would reap in the form of government-sponsored social projects thanks to the additional revenue from inflated fuel prices. These claims were of no interest to a population fed up with endless corruption and false promises from a president who had been indicted even prior to taking the oath of office.[1]

Consequently, Moise, along with a parliament dominated by his Haitian Tet Kale Party (PHTK), resorted to a familiar political maneuver in a bid to diffuse the growing upheaval. He temporarily overturned the decision to increase fuel prices, precipitated the resignation of his prime minister, Guy Lafontant, and installed a new government tasked with the responsibility of appeasing the masses.

However, an increasingly politicized public saw through the political masquerade.  Moise bought some time but failed to implement any meaningful reforms. The July 6-8, 2018, movement would prove to be more than a superficial wakeup call or a simple citizen-awakening moment as some news analysts would claim.

Progressively, in its aftermath, the political conversation in the country would evolve to become increasingly critical of the retrograde oligarchy, the right-wing agenda of the imperialist powers, and the entire oppressive social system.

Equally important, this charged political climate has given rise to a social movement fighting against specific cases of embezzlement. They entered the political fray under the generic name “Petrochallengers,” and have attempted to use social media and stage protest marches to inaugurate an era of administrative accountability and social justice in Haiti. Throughout the second half of 2018 and first half of 2019, the “Petrochallengers” pressured the highest administrative tribunal of the country to further investigate the successive administrations of Preval, Martelly, Privert and Moise for their suspiciously corrupt handling and/ or misappropriations of the Petro Caribe funds from  2008 to 2018. The “Petrochallengers” stem from an essentially middle-class youth movement[2].

Initiated by Venezuelan President Hugo Chavez, the Petrocaribe program supplied Haiti along with 14 other Caribbean countries with fuel. The agreement requires the Haitian state to pay only a portion of the purchase order upon receipt. The deferred payment effectively constitutes a low-interest loan that the state would service over a period of 25 years.

This payment arrangement meant that the Haitian state would, for once, have access, without strings attached, to over 4 billion dollars. It would allocate the money to development projects designed to address underlying imbalances in the productive system and the terms of trade resulting from U.S. and IMF-imposed neoliberal policies.

Two distinct senatorial reports and an additional one stemming from Haiti’s main auditor’s court, the Cour Superieure des Comptes, underscore myriad instances of embezzlements from the Petrocaribe funds under all of the last four governments. However, the overwhelming number of cases of misappropriations occurred during the five years of Michael Martelly’s presidency, between 2011 and 2016.

Jovenel Moise, handpicked by Martelly to succeed him in office and systematically backed by local oligarchs and the U.S. government, benefited largely from the Petrocaribe windfall that predatory politicians from his party have coveted. That Jovenel Moise’s name appeared 69 times in the auditor’s court report is quite indicative of his crooked record even before the inception of his presidency.

The pattern of failures of many of his short-lived ventures and the successive policy blunders that have tainted his administration underpin his incompetence. That did not, however, prevent him from campaigning, in the pure tradition of right-wing populist candidates, as an efficient manager and a messiah capable of bringing abundant financial wealth to the masses.

While his inability to deliver on those promises has gone a long way towards fueling the current protests, the deep-seated causes of the crisis reside in the structural characteristics of Haitian society. Of course, these are exacerbated by and Moise’s dubious and flawed management style.

While the decision motivated by the International Monetary Fund (IMF) to hike gas prices[3] acted as a catalyst for the July 6, 2018, social unrest, it also exposed the fragility of the political landscape. Indeed, by the following day, the movement snowballed into a sweeping outcry against the somewhat ill-defined “system,” which is unresponsive to the plight of the masses and creator of unbearable social inequalities.

Subsequently, throughout the second half of 2018 and 2019, the protests have mushroomed into even more massive demonstrations. This is particularly true for the 2018 protests on October 17, October 31 and November 18-23; and for those in 2019 from February 7-12, in early June, and, most recently, September through October. They were each resolute and unabated popular demonstrations – real indictments of the unbalanced social order.

Notwithstanding the active presence of traditional opposition to the government, the dynamic mass movement is not an outgrowth of institutional political organizations. The movement is, to a large extent, an expression of the historical class struggle in the country, emanating from antagonistic class interests and the outrageous disparities towering over social relations.

Yet, in the absence of a well-structured political left, overtime the traditional politicians may appear to recuperate the political outcome of the masses’ frustration and provide a limited and limiting leadership.

Even more appalling, the imperialist powers might still be able to leverage their political and economic assets for further interference in the country’s internal affairs. This is in spite of the fact that the long-suffering masses have absolutely no illusions in foreign intervention. Only resolute political actions from progressive sectors in the United States and European imperialist centers could limit the hostile stances of their governments against the vibrant social movement in Haiti.

So far, strong progressive international solidarity with the combative Haitian masses remains virtually nonexistent. However, the echoes in all popular quarters in Haiti of the more progressive narratives are very encouraging signs for the construction of a more emboldened and daring movement. Popular and progressive sectors consistently vow to sustain the mobilization in order to secure political and legal accountability against corruption, a rupture with the social order, and profound systemic changes,  irrespective of the outcome of the current convulsive period.

Moreover, Haitians constantly reference the unfulfilled promises of the 1791-1804 Haitian revolution and the ideals associated with independence leader and first ruler, Jean-Jacques Dessalines. They reference the period of well-being and happiness that briefly followed. And they have yet to give up the dream of a successful nation.

Much remains to be achieved. The emergence of a prosperous and egalitarian social order in Haiti could only be a function of the implementation of a revolutionary agenda, even in the context of very hostile geopolitical circumstances.

Jean Lesly René is a native of Haiti and is a graduate of the University of Massachusetts and the Harvard University Extension School. A lecturer in Africana Studies and an activist in Boston’s Haitian community, he is also the longtime cohost of the show “Haiti Focus” on WMBR, 88.1 FM.

Caption: A popular, progressive protest movement is growing in Haiti.

[1] The indictment on corruption charges were handed down on the heels of an official report published by Unite de Lutte Contre La Corruption (ULCC), an administrative body legally empowered to conduct investigations on financial and administrative crime.  ULCC thoroughly documented some of Moise’s fraudulent business transactions under the preceding Martelly’s regime. Once he undertook the duties of the office of the presidency, Moise quickly managed to scandalously arrange for a close and loyal associate to lead the ULCC.

[2] The emergence of this youth segment of the middle class into the political fray around August 2018, under the influence of the July 6 - 8, 2018 protests, brought as much fresh perspective as social prestige to the civic discontent.  But in turn, the middle-class youth movement that started as an accountability enterprise would soon emulate the broader popular movement in calling for Jovenel Moise resignation.

[3] In its effort to comply with specific IMF dictates, the government adopted the unpopular measures despite the fact that such price increases have traditionally been correlated with a substantial decline in the buying power of struggling people from the popular masses and the pauperization of the middle class.

Burkina Faso: In Need of a Continuing Revolution?

Why Black Brazilians Voted for a Fascist