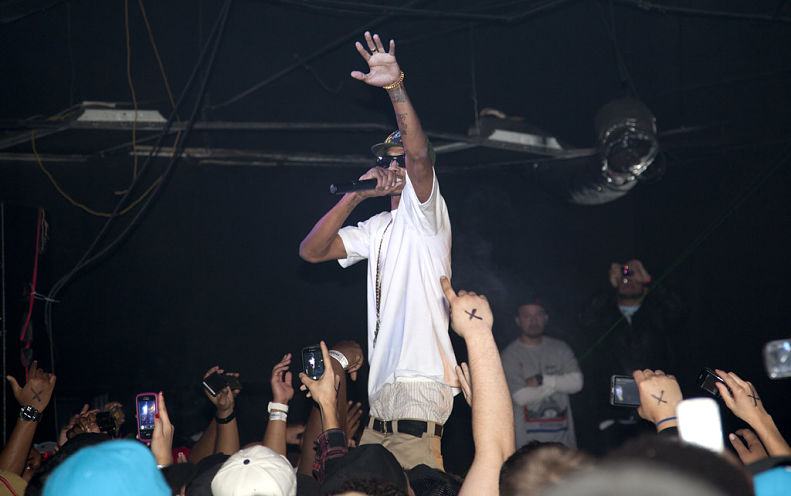 That live long enough to see a change

Finally wiggle out that maze

Find me out in different places

Surviving the streets of Los Angeles is a monumental feat for a young black man. Beyond the iconic Hollywood sign and miles of beach boardwalks, and beneath the ubiquitous palm trees, lies an underground culture that serves as a reminder of the city that has risen up in rebellion two times (Watts Rebellion and the Rodney King riots) in two separate decades (1960s and 1990s).

Ermias Asghedom, the son of an Eritrean-American father and African-American mother, was born and raised in post-Black Freedom Movement Los Angeles, scarred by the vestiges of the battles won and lost by the Black residents of Los Angeles.

The Making of a Hussle-r

Ermias, raised in this climate and context of 1990s Los Angeles, embraced the culture that surrounded him. Yet, he maintained a consistent suspicion that there was more to achieve beyond the camaraderie and admiration of the member of the Rolling Sixty Crips (RSC). As he walked the streets of Crenshaw and Slauson in the Hyde Park neighborhood of Los Angeles, he, along with his family and friends, recognized young Ermias’s passion and genius.

His brother Samiel tells the story of how Ermias, at the age of 12, performed a variety of chores and odd jobs around the community to buy pieces of a personal computer. Using the instructions provided by a magazine article, young Ermias not only assembled the computer from scratch but loaded software on it to begin recording music. As an aspiring rapper, he adopted the moniker, Nipsey Hussle. This act reflects the essence of Hip hop and sampling culture by taking the name of the comedian Nipsey Russell and retrofitting it to reflect his drive for financial independence and agency.

Against all odds, Nipsey Hussle would emerge from the violent streets of Los Angeles gang life first as a Hip-hop artist, then as a community-minded business man determined to change the environment for the next generation of young people growing up off Slauson and Crenshaw.

From Rapper to Community Leader

Beginning in 2005, at the age of 20, Nipsey Hussle began publishing his music independently in the form of mixtapes. He earned a brief recording contract with Epic records in 2010, and finally released his debut studio album, Victory Lap, in 2018. During this thirteen-year period (2005-2018) Nipsey founded an independent record label All Money In, disrupted mixtape culture by pressing only 1000 copies of his album Crenshaw and selling them for $100 per CD, established the apparel store The Marathon (on the corner of Slauson and Crenshaw), took his family on a pilgrimage of his father’s homeland of Eretria, and saw his debut album be nominated for Best Rap Album at the 61st Annual Grammy Awards. He accomplished all of this while being targeted by the Los Angeles Police Department (LAPD) and having his store raided multiple times only to have charges dropped.

Leveraging the success of his debut album he immediately executed his vision of transforming the community in which he had fought so hard to survive. One of the early glimpses of his visionary attribute was the intentional and deliberate recordings he made with members of the Bloods (a rival gang). These records with Game and YG were empirical evidence of his aspiration to serve as a peacemaker.

Nipsey forged partnerships with a local fast food chain to have his apparel company provide the uniforms, purchased the shopping center that occupied his clothing store, established a CoWorking space and tech incubator (Vector 90), and laid the groundwork for a hair salon and Caribbean seafood restaurant before the unthinkable happened.

On March 31, 2019, Ermias Ashghedom was gunned down in the parking lot of The Marathon store. He was 33 years of age. When the news spread through social media, the magnitude of the loss was expressed immediately by athletes, entertainers, and eventually politicians and community leaders. So many expressed grief, but none more than the Los Angeles community that witnessed his rise and his demise.

Since the tragic events that took place on March 31, Nipsey has been memorialized and immortalized. In the grand scheme of life, Nipsey’s accomplished may not be on the same scale as the efforts of some of his contemporaries, but that’s precisely why communities have mourned his tragic death: because of the potential that we lost on that day. His parents lost a son, his siblings a brother, his children, Emani and Kross, a father and his partner, actress Lauren London, her best friend.

Ermias’s life represents the determination of a man who rose above his circumstances but not his people. The people celebrated the accessibility of a man who would leave a meeting in Beverly Hills with Jay-Z and then come eat a fish dinner on the hood of his car in South Los Angeles. He literally embodied the African diaspora in his twin cultural heritages of which he never privileged one over the other.

Nipsey Hussle is the prototype of a man who seeks to employ the dispossessed, house the homeless, clothe the children and breathe life into the dreams of those left out of the echelons of privilege. The lyrics in his song “Dedication” express his determination to remove the barriers that plagued him in post-Black Power Movement Los Angeles. He stated, “Know he a genius, he just can’t claim it/’Cause they left him no platforms to explain it.” These lines represent the simultaneous frustration and determination of a man who resolved to not allow the same limits he faced burden the next generation.

This is why he called his movement, The Marathon, is intergenerational. It is disruptive. It is revolutionary.  Ermias Ashghdom/Nipsey Hussle lived a life as an African man cloaked in the cultural esteem that allowed him to be unapologetically African. His fearlessness allowed him to use his inspirational machete to clear the path for the next generation.

Afro-Colombian Workers and the Fight Against Racial Discrimination