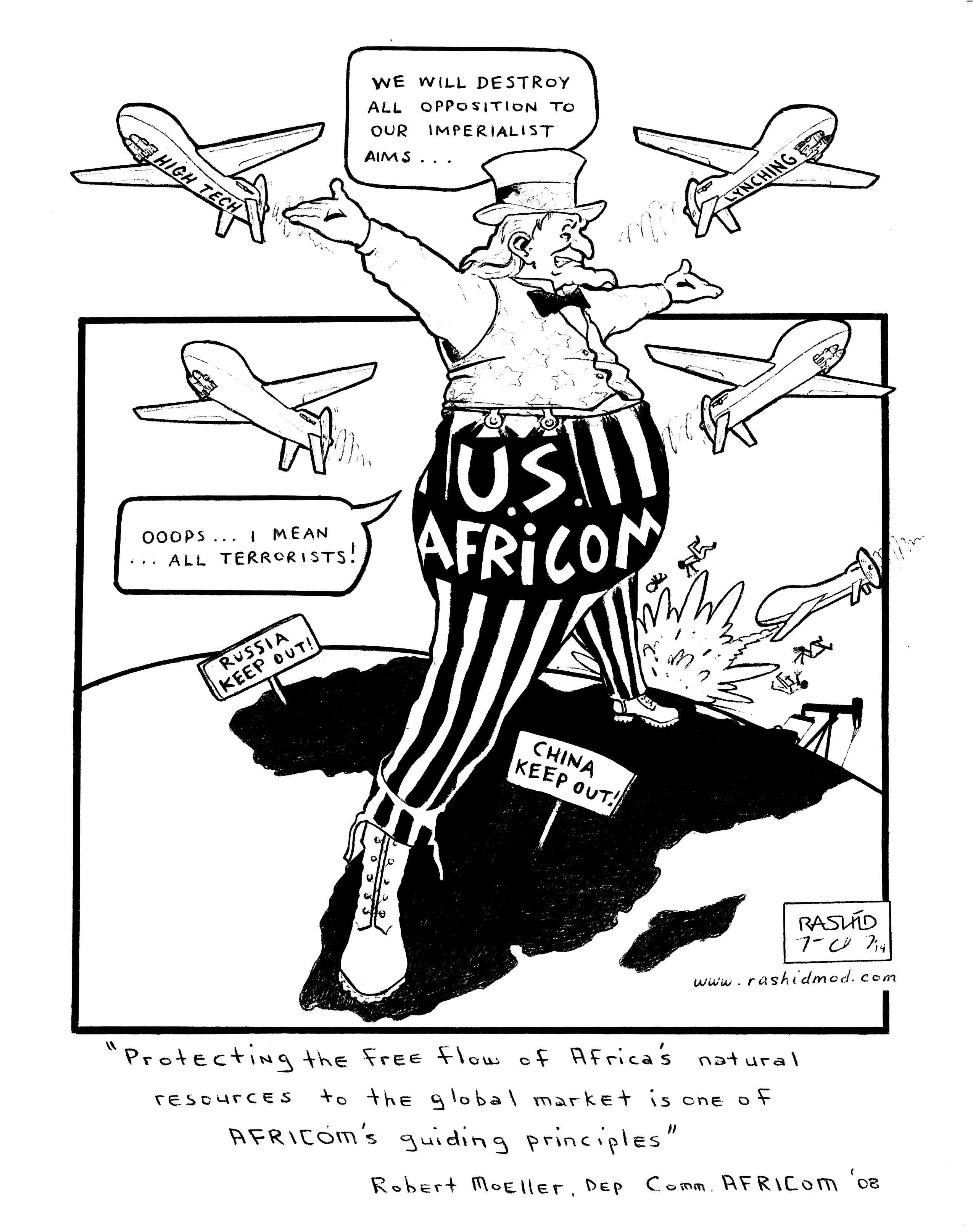 By Salih Booker and Temi Ibirogba

The United State Government’s overall orientation toward Africa has, since September 11, 2001, increasingly been defined by the militarization of U.S.-Africa relations. In 2003, the George W. Bush administration established the first permanent U.S. base on the continent in Djibouti. In 2007, the U.S. Africa Command (AFRICOM) was created. In 2016, construction on the $110 million Reaper drone base in Agadez, Niger began and is scheduled for completion in mid-2019.

Today, the U.S. military footprint is far larger than most members of the U.S. Congress, much less the American public, could have imagined. The public in African countries where the U.S. military is active are largely unaware of the military agreements their own governments have entered into with Washington. There is a lack of transparency, but officially it is known that there are more than 7,500 U.S. troops in Africa, operating in 50 countries, and special operations forces active in 32 countries. There are at least 34 bases (known as “forward operating sites,” “cooperative security locations,” and “Continency Locations”) spread throughout the continent that house special operations forces and manned and unmanned aircraft. These are used as jumping-off points for missions. The U.S. military undertook 3,500 missions in 2016 alone, a nearly twenty-fold increase since the establishment of AFRICOM. Last year, Sen. Lindsay Graham stated that Americans should expect more, not less, U.S. military activity in Africa in the months and years ahead.

While the initial militarization of U.S.-Africa policy in the twenty-first century occurred during the Bush Administration in the context of the so-called “War of Terror,” the administration of Barack Obama solidified this policy approach by increasing military spending and deploying more troops to Africa. President Donald Trump is following the lead of his predecessors, and over the past two years the number of U.S. forces in Africa has increased by nearly 1,500, bringing the total to around 7,500, not including Special Operations forces.

Despite this increased militarization, U.S. military activity has done little to curb terrorism or violent extremism in Africa. In addition, the focus on building up military forces at the expense of civilian authorities can weaken already fragile democracies and enable corruption. Military buildup also increases the flow of deadly weapons to a region already awash in them.

The increase in U.S. military involvement has been paralleled by a weakening of civilian engagement on the continent. The diplomacy deficit starts with a lack of personnel assigned to these tasks. President Trump has failed to appoint ambassadors to key states such as South Africa, Nigeria and Egypt. The Assistant Secretary of State for African Affairs, Tibor P. Nagy, responsible for developing and implementing a coherent U.S. policy for Africa, was not appointed until July 2018 (a year and a half after Trump’s inauguration).

By 2050, one in every four humans will be African. Yet, instead of preparing to build a relationship with Africa that can grow with the continent, based upon diplomacy, development cooperation, and respect for human rights, the United States is doubling down on more than a decade of reliance on its military as the primary vehicle of engaging with Africa. The consequences, as one might expect, are overwhelmingly negative. These include civilian deaths due to unmanned and manned aerial flights in Somalia and Libya, with the potential to increase such deaths elsewhere; increased corruption as a result of US military and counterterrorism training programs; potential violations of African constitutions in countries like in Niger; angry protests by the citizens of these countries who are unhappy with the U.S. military presence; and finally, the declining credibility of U.S. diplomats.

The U.S. military claims to be helping African countries fight an enemy they may actually not have, while the U.S. government is failing to help those same countries deal with the real killers – namely, poverty and corruption, global inequality, and the related denial of basic human rights.

Salih Booker is the President of the Center for International Policy, and Temi Ibirogba is the Program and Research Associate for the Center’s new Africa Program.