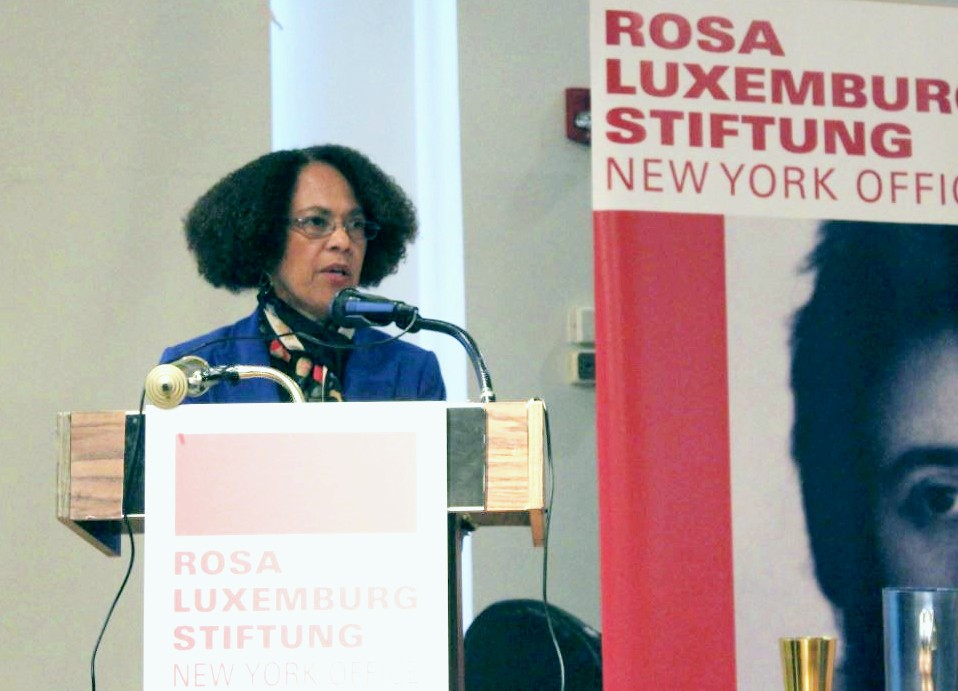 By Aaron Jamal and Sian OFaolain

In February 2020, the two of us attended the Black Organizing for Leadership and Dignity (BOLD) National Gathering and presented some of our initial conversations with veterans of the Black Radical Congress. One of those veterans, indeed a central veteran, was the late Leith Mullings. This presentation was held at our final major in-person gathering of Black movement activists before COVID shrouded the world. While we cannot hope to cover the full range of a life as audacious and profound as Mullings’, in this essay we hope to convey this: Mullings was a revolutionary socialist and Black feminist anthropologist whose contributions to the Black freedom struggle will radiate long after her passing.

We came to know Leith Mullings principally through our project documenting the Black Radical Congress. Mullings, along with her late husband Manning Marable, Bill Fletcher, Abdul Alkalimat and Barbara Ransby founded the Black Radical Congress, which aimed at cohering a Black radical left with a national conference held in Chicago in 1998. Leith Mullings and Barbara Ransby were the program directors for the first congress.

By the 1990s, Black revolutionary politics had been pushed to the margins. Reaganism seized political hegemony in 1980, solidifying neoliberalism as the dominant global economic system, and completing a 12-year counter revolt against the victories of the Black freedom struggle. The BRC founders, most positioned within academia, were concerned with the success of the 1995 Million Man March, with its reactionary and heteropatriarchal ideology, and believed a Black left was desperately needed.

The team invited revolutionary Black nationalists, Black feminists, Marxist-Leninists, other leftists and everyday Black activists to come to a conference with an initial call to action. They hypothesized that a growing number of Black people were ready for a legitimate alternative to the dominant form of politics.

The organizers were, however, still surprised at the extent of the positive response. Their organizing team grew to 200 people in a matter of months. The first BRC Congress was an incredible organizing feat for a time with limited social media, early forms of email, and no funded organization with paid staff. With a few months of organizing, the BRC was able to mobilize 3,000 Black people to its first two-day congress.

Some 21 years after the BRC was founded, it was Bill Fletcher, during the 2019 BOLD National Gathering, who inspired us to begin to learn and, in some ways, share the history of the congress. Our hope with this project is that the real breakthroughs, and the significant challenges, of the BRC can be studied and wrestled with by a new generation of Black revolutionaries. We set out to contact as many national and local leaders of the BRC as we could, to scope out the project. When we learned of Leith Mullings passing in December 2020, we considered ourselves to have been fortunate to have had an incredible and wide-ranging dialogue with Mullings exactly a year prior. We decided to share here three lessons we learned from that conversation, in hopes that it will encourage our generation of Black radicals to learn more and keep Mullings’ revolutionary commitment alive.

Rooted in decades of academic and political work within many organizational formations before and after the Black Radical Congress, Mullings shared with us her learning and reflections from her involvement in forming and leading within the BRC. These are three of the lessons that we want to lift up from our conversation in December 2019, as we close out 2020.

One: Building the Black left was and remains necessary.

For Mullings, building the Black left was and remains necessary. Her work in building the Black Radical Congress demonstrated that Black people were hungry for socialism, even if that wasn’t always the label Black people gave to our visions. Mullings believed that the demands of the Black left social movements lead toward a socialist society. During a period of high anti-communism, Mullings noted how important it was for the BRC to be clear that capitalism isn’t a system that we can use, and that we must transcend it. She shared that what was so surprising about the formation of the Black Radical Congress was how open people were to participating, despite being in a period of high anti-communism.

Mullings was no dogmatist. She believed that it was possible for different ideological trends in the Black left to work together. As the BRC formed from the first congress into an organization, Mullings learned that it is important to think about what the problems are that we face as a movement and how you work on those problems. In our era, Mullings saw young people as an inspiring political force, “There were points when I was quite discouraged. But what’s so encouraging now is in the young people. What’s so inspiring is that organizations like the BRC end, but they don’t end: They are reborn. I see that in the Movement for Black Lives. They are addressing the problems of the BRC that we didn’t.”

Two: The Black Radical Congress faced significant challenges that have helped a new generation of organizations develop and grow.

The Black Radical Congress was Mullings’ attempt to help forge a viable and powerful Black Left formation. The project faced significant challenges, the first of which was the era in which Mullings and four other Black revolutionaries were building the BRC. The left and Black radical organizations, in particular, had been severely repressed and disorganized after the movements of the 1960s and 1970s. Many folks were carrying serious trauma from the collapse of organizations, infiltration, political prisoners and state violence, as well as disagreements on international left strategy after the fall of the Berlin Wall. But the BRC faced internal challenges as well.

The Black Radical Congress was initially a large national conference that then continued on into an organization. As interest grew in the conference, over 200 activists played some coordination role, but Mullings noted that the structure was not well thought out. As the BRC continued into an organization, there were challenges from holding multiple organizational structures at once: a united front, a national organization with local chapters and some issue-based campaigns. Some of the local branches were well organized and worked well; some were not and did not.

There were political differences, small and large. The BRC was an organization of revolutionaries from different traditions: Black nationalist, Black feminist, Black Marxist. Mullings noted that it was unclear whether this kind of group could have coalesced for long. The BRC was trying to build a united front, but did not name tensions, which led to the conflation of political and ideological differences into interpersonal beef.

For Mullings, socialists need to name the distinctions and wrestle with them. We need to treat each other with care. In short, Mullings believed that part of what was lacking in the culture of the BRC was a genuine approach to generative conflict, the “principled struggle” that N’Tanya Lee has popularized in Black left circles. We believe this is another critical lesson our movements must acknowledge and address.

Another major challenge Mullings noted in the BRC were patriarchy and homophobia. She lauded the effective and courageous moment when Cathy Cohen addressed the congress in Chicago, putting forward the issue of homophobia in the Black community. The notions of care within the BRC were also patriarchal, in Mullings’ view, where people would not talk about what were considered personal issues in political spaces. Mullings told us that she found the inclusiveness of gender and sexuality so encouraging at the BRC, “and just not having it with patriarchy.”

Three: Political Interregnum is the social era under which we live

Mullings reflected on the significance of a resurgent left wing of the Democratic Party, represented by Bernie Sanders and “The Squad.” For the first time in her lifetime, national candidates were talking about socialism, and half of young people in the United States agree with socialist principles, representing a historic opportunity. For Mullings, the problem lies with the historically white segments of the left that diminish or do not understand the function of racism within racial capitalism. Until our movements understand that racism and capitalism are mutually constitutive, the Left will not fulfill our historic role.

Mullings long ago concluded that shrewd class reductionism is severely problematic in our context. When we asked what’s possible for the U.S. left connected to international movements, Mullings told us, “When I speak, I often quote Gramsci’s phrase on the interregnum, the old is dying, but the new is not yet born. In between all kinds of things happen. The left has an incredible chance and opportunity.”

Referring to the Italian Marxist Antonio Gramsci, Mullings believed the age in which we lived was characterized by the fact that “the old is dying but the new cannot be born; in this interregnum a great variety of morbid symptoms appear[a].’ For Mullings, Gramsci's notion of interregnum ought to elicit not just fear of the unknown, but excitement for what is possible as we rebuild a strong, internationalist left that centers an analysis of racism within the class system.

For over half a century, Leith Mullings combined a radical feminist philosophy with a penetrating Marxist practice to create a rich tapestry deeply rooted in the Black radical tradition. Mullings was a long-time member of the Communist Party USA (CPUSA) and cofounder of the Marxist Scholar Conference[b]. Her work at City University of New York over the span of three decades led its anthropology program to become a mecca for Marxist anthropologists. Mullings was also deeply dedicated to intergenerational movement dialogue that would facilitate lessons from the struggle for a new generation of activists.

Mullings’ commitment to young people shone through in her role as a member of Scholars for Social Justice, and as a cofounder of The Rising Majority,a multiracial left formation guided by the Movement for Black Lives, with the goal of building a more radical national U.S. Left. Mullings was also a committed internationalist in every sense of the word. She participated in observatories against racism in Bolivia, supported CRIOLA, a Black women’s organization in Brazil, and maintained ongoing solidarity work in Chile and Guatemala. Her hope was to help build a collective understanding, among Black feminists, legal scholars,and Black/Afro-descendant and indigenous social movements about the shape of racism in specific countries and across the Americas and how organizations were prepared to fight it.

We offer these reflections to share how profoundly our one-hour discussion with Leith Mullings in December 2019, and the glimpse we got into her life’s work and unwavering dedication to Black radical organization-building, has impacted us. She was so generous and open with us when we reached out, which we believe speaks to her deep commitment to the work. At a time when so much Black liberation organizing is led by Black femmes, queer and gender non-conforming folks rooted in a Black feminist politic, this not-so-distant history reminds us to celebrate persistent leadership of Black women leftists. Building a strong Black Left is so much larger than any one leader, organization or coalition. However, but Leith Mullings’ life invites us to commit our lives to revolutionary struggle, to building intergenerational political relationships, as we build organization, and experiment with and learn from liberatory strategies.

Podcast on The Dig, Jacobin podcast, Black Socialism, Nationalism, Neoliberalism with Michael Dawson of U Chicago

In our interview with her, Mullings recommended this workshop that she organized as part of The Majority. SSJ Think and Action Tank on Racial Capitalism

Sian OFaolain is a Black feminist, an organizer and resource mobilizer, and a mama. Raised in Atlanta, based in New Orleans, with family roots in the Caribbean and Ireland, Sian is committed to revolutionary connection across diasporas.

George Floyd and the Worldwide Response to #BlackLivesMatter

Covid-19 and the effects on North America