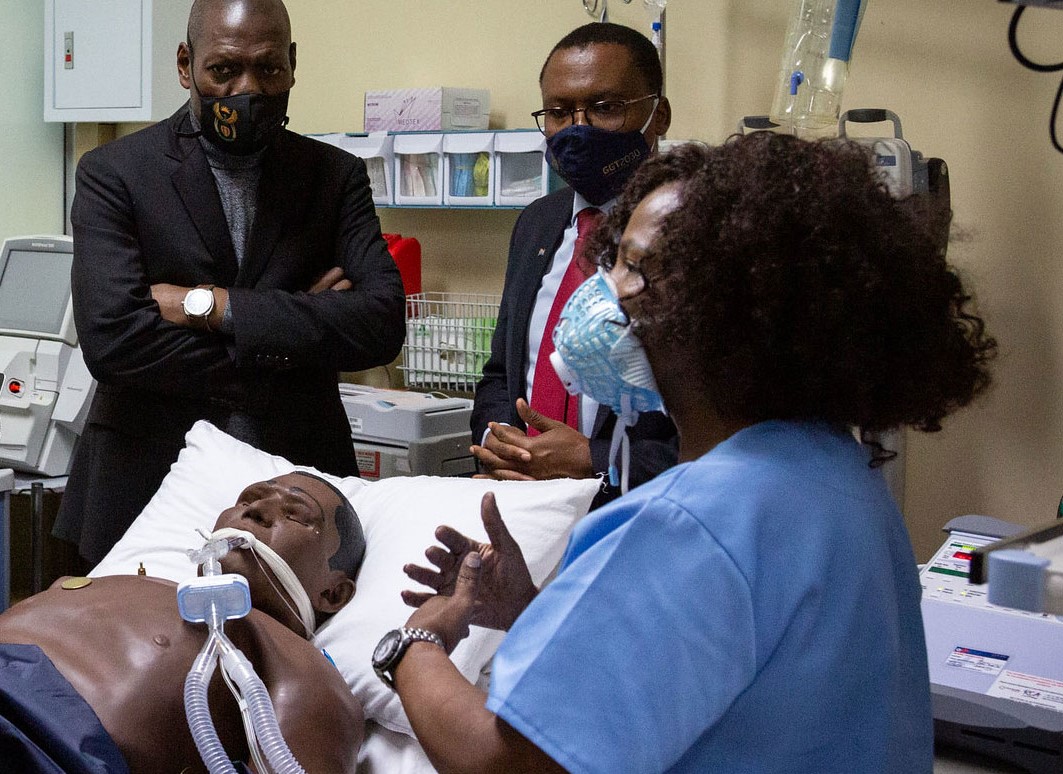 I rolled my eyes over a July press release from the United States’ South African consulate hailing the donation of 1,000 ventilators and $3.5 million for oxygen manufacture to assist that nation’s fight against COVID-19. Ambassador Lana Marks said, “When a global health crisis arises, America doesn’t wait to be called; we respond with timely, appropriate and expert assistance.”

I rolled them again in August when I saw that the United States donated 200 ventilators to Nigeria, with Ambassador Mary Beth Leonard saying, “The American people are committed to working with Nigeria to implement effective disease surveillance efforts and to improve its capacity to safely isolate and treat confirmed cases as we look ahead to a virus-free Nigeria.”

I sure hope South Africa, Nigeria and the rest of Africa get what they can, and then not hold their collective breath waiting on the United States to further deliver on its lofty words. When the pandemic slammed the United States, the last thing Black people got was timely, appropriate and expert assistance, surveillance or capacity to isolate. Instead, African Americans were slaughtered. If we died at the same rate from COVID-19 as white Americans, more than 20,000 Black people would still be alive today.

During COVID-19, I’ve been advising institutions and community groups on safe openings. I have also written about and given talks on critical care rationing, out of concern that systemic racism would cut Black people out of the queue for life-saving equipment, such as ventilators.

In Italy, there were instances of physicians denying ventilators to older patients. When New York City was at the center of the U.S. pandemic, there was one report on the rationing of intensive care unit dialysis machines at hospitals serving working-class people of color in Queens.

That made progressive health professionals like myself concerned that early proposals to ration care used point scales that would have penalized older Americans and prioritizing those in better prior physical condition. That put marginalized groups, including people of color, in the back of the queue. African Americans, Latinx and Indigenous Americans have disproportionately higher rates of lung, heart and organ diseases that makes them more vulnerable to COVID-19.

Those diseases are tied to the nation’s racism in housing, education, job and health practices, resulting in people of color being more likely to live near toxic facilities, more likely to live in cramped multigenerational homes where the virus can easily spread and more likely to be in “essential” service jobs that require intense contact with the public.

I posted a petition on Change.org, advocating a lottery instead of a point system. Our outcry led to a less penalizing point system.

Since then, others have proposed lotteries, such as the chief medical officer for the San Francisco Health Network and two other coauthors, saying a lottery is “the fairest way to allocate a very scarce drug among eligible patients,” in the arena of COVID-19 medications.

That commentary said that even with a lottery, hospitals should constantly review data to assure that “facially neutral policies for allocation do not in practice result in unfair disparities that harm groups that are already disadvantaged.”

The implications for sub-Saharan Africa are important. With the exception of very multiracial South Africa, race is not likely the concern it is in in the United States. But it will have to still come up with critical care practices that do not result in unfairness through age, prior health, disability, sexual orientation or political or social connections. As one who has traveled to Uganda, South Africa, Nigeria and Tanzania to work with physicians on noncommunicable diseases such as diabetes, heart disease and obesity among the top underlying conditions connected to poor COVID outcomes, many challenges remain for physicians beyond the American bugaboo of racism in deciding who gets care.

I hope that despite their historic lack of resources African nations can learn from what America did not do. Mainly, President Trump and governors of states, primarily in the Old Confederacy, ignored science at almost every turn to reopen businesses, restaurants, schools and sports. Much of that is backfiring now as the virus has been given a second life in the United States, on track to kill 300,000 Americans sometime this winter.

The failure to follow science, the failure to push hard on social distancing, face coverings, testing and tracing and locking down businesses until the virus was truly suppressed, landed hardest on Black people. White governors treated Black mayors of majority Black cities as if the state were a plantation, constantly overriding the pleas of mayors for mandatory face covering orders and more cautious re-openings.

Unfortunately, that is what the United States has done. I hope Africa, regardless of resources, does what it can to avoid another human sacrifice.

Michelle D. Holmes is an epidemiologist at the Harvard School of Public Health and associate professor of medicine at Harvard Medical School & Brigham and Women’s Hospital. The opinions expressed in this article are solely her own and do not reflect the views and opinions of Brigham & Women’s Hospital or Harvard University. Her Change.org petition for just rationing in coronavirus care can be found at: Change.org/JustRationing.

Caption: A South African medical professional (r) illustrates the proper use of ventilator, using a dummy, for diplomats.

Movement for Social Justice of Trinidad and Tobago

Interview with Jacob Mundy on Libya